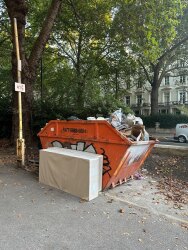 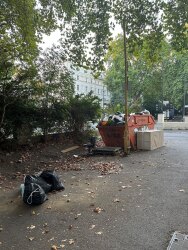 There is a rubbish container for the constructions works in 36 Westbourne terrace. It’s full and they throw the rubbish in the floor/street. Also the Royal Eagle hotel throw his rubbish and furniture there as well There are chairs , mattresses on the street/road and some people sit there on the night.