Reported via Android in the Rubbish (refuse and recycling) category by Malcolm Camp at 23:00, Sunday 18 September 2022 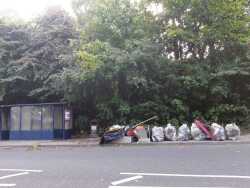 Collected fly tip from behind bus stop and litter in bushes mostly from that multiple fly tip.