Dog fouling on the pavement outside 15 Sale Place 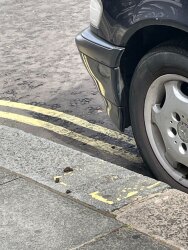 Also, this section of the street doesn’t seem to be swept as often as the others