Reported via desktop in the Flytipping category by robert caplehorn at 12:40, Sunday 14 August 2022 using FixMyStreet Pro 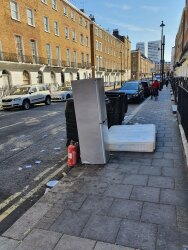 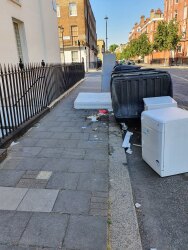 I have written several times about the disgusting state of the area immediately surrounding the communal rubbish bins on the corner of UMS and York St in W1. This is a regular occurrence. This is encouraging people to dump major items of household goods such as fridges, washing machines and mattresses. The photos were taken at around 9.20am this morning. This is not just unsightly but dangerous. Something needs to be done about this - the bins need to be re-located to somewhere where it is less conducive for people to fly tip rubbish from vans and cars.