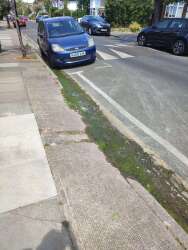 This leak has been trickling for over 3 years, with algae now growing in the wet patch, reported various times to Thames Water and they have been out to try and fix but it's never been fully resolved. Have reported again today on Thames Water site. Suspect leak is meter box or customer supply pipe