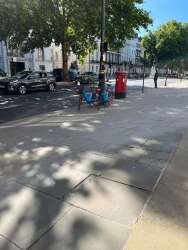 These were "placed" in front of 55 Portland Place on the sidewalk with tags that said "Try for Free." There is a bay for them one block north on Portland Place. Can the company be made to place them next to the other ones in the bay?