Reported via mobile in the Flytipping category anonymously at 16:45, Thursday 4 August 2022 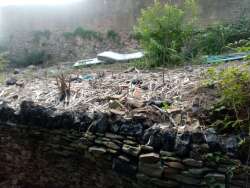 Mattresses, several barriers used by council, litter including crisp packets and other litter all over the banking. If only the flytipping is removed and I get a questionnaire asking if it's fixed I'll have to dsay no, because the litter needs to go too.