Reported via desktop in the Street works and obstructions category anonymously at 14:31, Monday 18 July 2022 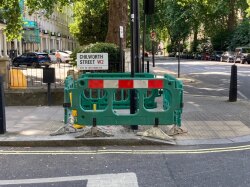 Barriers have been put up on the corner of Chilworth Street and Westbourne Terrace many months ago. No works have ever been done, and none appear to be planned. It would be great to now remove them