Large gap in fencing between my private garden & m40

Sent to National Highways less than a minute later 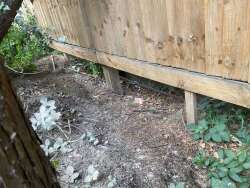 I have just purchased this property ( ) and have found that there is a large gap between the fence and the floor, which my dog has got through on several occasions now, which is a worry. I have been told to contact National Highways to assist me.