Reported via desktop in the Graffiti and flyposting category anonymously at 16:38, Monday 4 July 2022 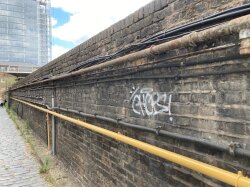 A graffiti has been sprayed on the brick wall alongside Paddington station, in front of the small road in front of St-Mary’s hospital. It is at the moment the only graffiti on the wall and it would be great to erase it before others are added.