Reported via desktop in the Roads/highways category anonymously at 13:54, Friday 13 May 2022

Sent to Bridgend Council less than a minute later 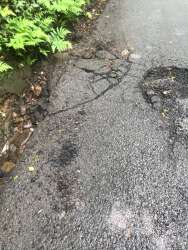 I first reported the blocked drain, and other blocked drains in Bryn Ceyln Lane on the 28th October 2021. The drain for which I provided a photograph was never unblocked and the water trapped around it went on to break up the surface of the road. There was some sort of repair which was broken up again within days because the drain had not been unblocked. The heavy rain we had a few nights ago resulted in even more damage as shown in the photographs. So the work will cost even more than before to rectify the problem. Please can you clear the blocked drains and fix the damage to the road. I walk up this road almost every day and it is used by other pedestrians and lots of vehicle's. There is also a lamppost nearby which is leaning, and has clearly hit by a car and is now only supported by a tree.