Reported via mobile in the Rubbish (refuse and recycling) category anonymously at 15:21, Thursday 28 April 2022 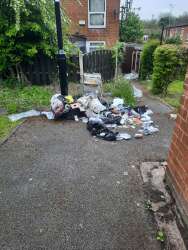 Lots of rubbish dump outside 14 carwood green S4 7FD. It has been there for weeks.