Fly tipping next to bin

Reported via Android in the Flytipping category anonymously at 06:46, Mon 6 December 2021 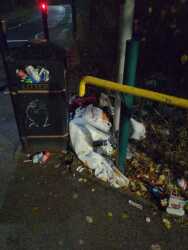