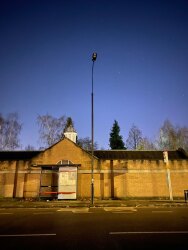 I have previously said this light was broken and it was then marked as fixed, the second time this has happened this week.