The Council refuses to take effective action against fly-tipping 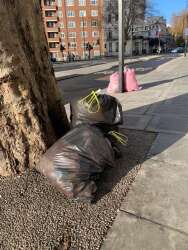 This has been going on for years. Antonia Cox knocked on my door and told me to send her evidence and that she would make sure effective action was taken. I have sent her pictures with names and addresses from the rubbish bags, but my emails have not been answered. The Council is giving a serious impression of not caring. What do local residents have to do to change this?