Reported via iOS in the Flytipping category by Hilary dawtry at 08:20, Thu 28 October 2021 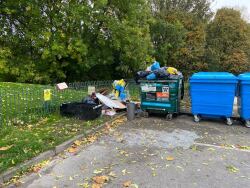