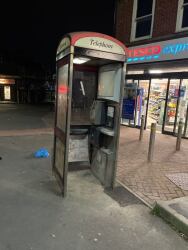 The old phone box outside Tesco Express is being used as a shelter for ASB such as drug dealing and defication.

Can the local authority please look into it being removed?