Sent to Glasgow City Council less than a minute later 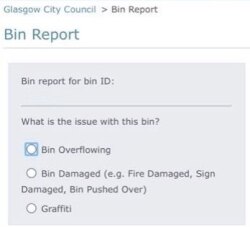 You have just introduced QR codes on the street bins. Good. And yet, despite these bins acting as fly tipping magnets - as you well know - you omit any option for 'Fly tipping next to bin' in the app.

I've now just had a Twitter response ignoring why that option is not there and been told to raise a report, as usual, through the council website.

So, you rely on the public reporting other bin-related issues through the new QR codes but at the SAME geo-location, we are still expected to raise a separate report for an issue you still have not even acknowledged publicly let alone addressed - fly tipping next to street bins. This makes no sense whatsoever. The technology is now there and paid for by us so why isn't it being harnessed fully thus take the unpaid burden off the public?

Please add this option ASAP then get flytipping warning stickers on ALL hotspot street bins + a media educative blitz re same. Thanks.