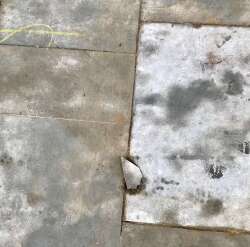 Some workmen removed one of the pavement slabs today (05/10/21) outside 25 Park Crescent. No advance notice of those works was given, so not sure what the works were about. In the process of removing the slab, the workmen caused a substantial chip, causing a trip hazard. The entire pavement was redone entirely earlier this year, so hard to understand why some workmen would now break the slabs.