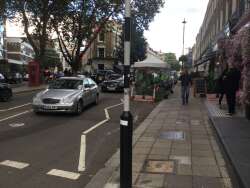 An 'al fresco' tent erected outside Abasto cafe in Connaught Street infringes on the zebra crossing road markings and obstructs the view of both approaching vehicles and persons using crossing. (see photo). This is dangerous as it is getting darker earlier and this crossing is used by parents taking and collecting children from the nursery school in Albion Street.