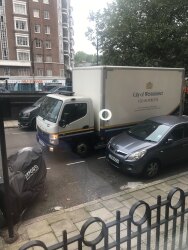 Having listened to the engine running for 20 mins. I requested to the operative to switch off the engine. "He replied that it won't restart". I informed him I would report him and low and behold he switched it off (and it restarted). 1. I do not expect a civil servant to blatantly to lie. 2. Equipment should be maintained so it can be switch on and off. Especially if it prevents added pollutions (Noise and airborne particulates). 3. The operative job is all about environmental issues and one would expect behaviour to reflect that. After all one is judged on behaviour. 4. Noise is also a pollution and a large body of evidence shows exposure shortens life expectancy. Switching off engines would help significantly. 5. As a local fee paying resident I do not want to be funding my own demise. I have chosen to report this purely due to the rude and arrogant response I received from the operative.