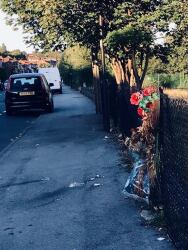 The shrine has been there for several months. All real flowers have been dead for ages. The bright ones in the photo are plastic.