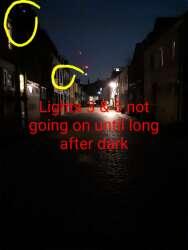 Streets lights 3 & 5 are not going on until hours after it is dark - the bulbs work but they don't go on until close to 10pm. The other lights in the Mews are OK and all come on in the early evening just as it's getting dark. Appreciate if lights 3 and 5 can have their timers adjusted. Thank you. Originally reported as 132375 but had incorrectly placed the map pin on Lancaster gate so ignore 132375 as this report is the correct one for Leinster Mews.