Reported via iOS in the Rubbish (refuse and recycling) category anonymously at 13:05, Wednesday 1 September 2021 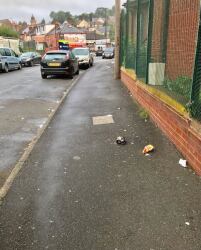 Behind the car park of the doctor’s surgery in the part of Owler Lane which leads to the main gates of Fir Vale School & Oasis Academy, access from Heathcote Street. .