Reported via iOS in the Rubbish (refuse and recycling) category anonymously at 20:07, Sun 22 August 2021 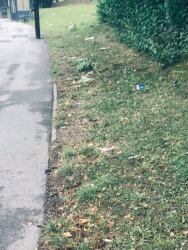 Immense amount of litter (photo doesn’t do it justice) on strip of grass which runs alongside Fir Vale School between Heathcote Street & Page Hall roundabout.