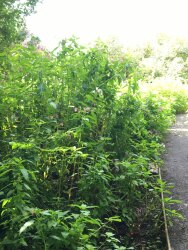 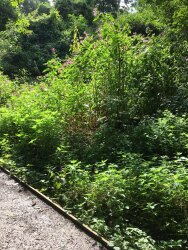 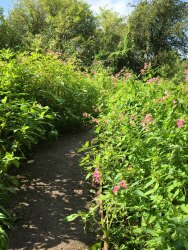 Notifiable weed Himalayan Balsam (possibly brought in on gravel for path?) excluding native plants and taking over the woodland area. Easily pulled up but the explosive seeds after flowering are hard to stop and spread hugely. People may walk over the seeds and take them hone on soles of wellies. Fast action would slow down the spread of ghis weed . https://www.gov.uk/ guidance/ prevent-the-spread-of-harmful-invasive-and-non-native-plants. I think you don’t have to remove it but if the contractors brought it in they are liable and if it spreads to private gardens , you are responsible?