Reported via desktop in the Signs and bollards category anonymously at 11:24, Mon 26 July 2021 using FixMyStreet Pro 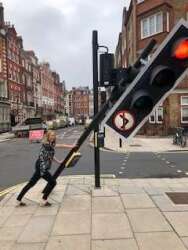 Almost took my eye out on this. It was done on Saturday (late afternoon). I guess by the scaffolding lorry that was attending at the collapse of number 58 Queen Anne Street. I work at 34 Queen Anne ( Philip Ross Solicitors) Davide Williams ( david@philipross.com)