Reported via desktop in the Pavements/footpaths category by Sam Webber at 11:41, Fri 16 July 2021 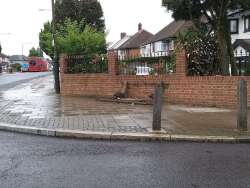 This bench (which is popular with elderly residents) has been broken for 5 months now and rubbish is being dumped on top of it. Could it be fixed please?