Reported via Android in the Rubbish (refuse and recycling) category anonymously at 09:42, Saturday 3 July 2021 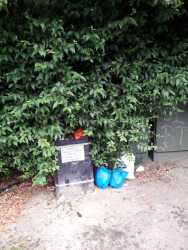 Overflowing litter bin, access difficult due to overgrown hedging. There had been packages around the bin which have been removed but the bin remains unemployed possibly due to aforementioned.