Reported via iOS in the Street cleaning category anonymously at 16:16, Mon 21 June 2021 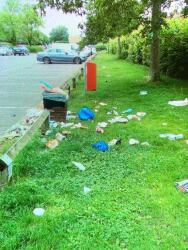