Bollard hit by a van/lorry

Reported via desktop in the Signs and bollards category anonymously at 10:47, Thu 17 June 2021 using FixMyStreet Pro 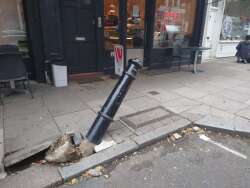 Bollard has been hit by a van/lorry. Can action be taken asap, as it can collapse and hurt someone