Reported via desktop in the Abandoned bike category anonymously at 17:40, Tuesday 18 May 2021 using FixMyStreet Pro 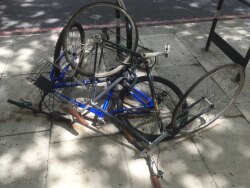 The bicycles attached to posts outside Rudolf Steiner House on Park Road NW1 have been abandoned and have been turned upside down and are a dangerous hazard. They need to be removed.