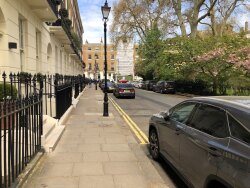 Driver was using his mobile phone while parked on double yellow line with engine idling. As front passenger window was open a third I was able to politely ask him to turn off his engine. He was calm and polite but told me "you are wasting your time". He drove away after I took picture.