Reported via iOS in the Rubbish (refuse and recycling) category anonymously at 09:58, Saturday 27 March 2021 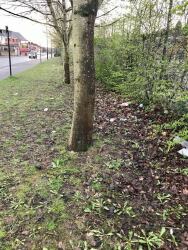 On grass verge next to school grounds in Rushby Street. Doesn’t look much on the photo, but it’s all the way along.