Reported via desktop in the Obstructions on pavements and roads category by Roger Ham at 19:22, Tuesday 23 February 2021 using FixMyStreet Pro

Sent to London Borough of Bexley less than a minute later 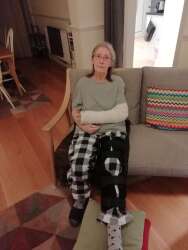 Cracked pavement caused my wife to trip..she is 74..she fell and broke her wrist..knee cap and finger..in hospital from 19th Feb until 21st. Neighbour helped her home. She will be incapacitated from 8 to 10 weeks. Lots of elderly people in road..your early response would be appreciated.