Reported via iOS in the Rubbish (refuse and recycling) category anonymously at 13:27, Mon 25 January 2021 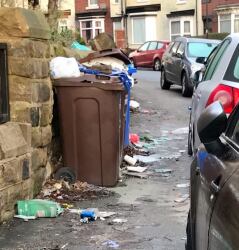 Outside 1st houses on the left in Earl Marshal Road just up from junction with Grimesthorpe Road. So much rubbish it’s overflowed into the street. I had to kick it to the side to use the pavement.