Building under construction that has blocked the pavement and the road 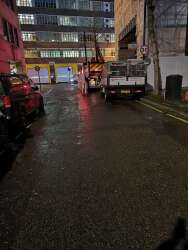 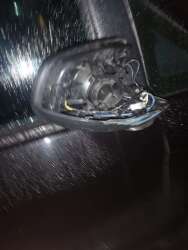 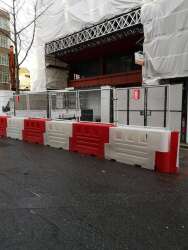 I am a resident of Westminster. My resident parking permit is F. I parked my car at night on the 22/12/2020 at the resident parking: Harcourt St. In front of the resident parking the building in front is under construction. This building is the opposite of the parking and have blocked the pavement and have blocked 3 car space of the single yellow line. They have blocked it and cars that are big are not able to go through. A car crashed my car at the parking and have made a big damage on my car. I have all the pictures. The name of the 2 company that is responsible for the construction is GA (Gilbert-Ash) and Red Hammer and is on the corner of Old Marylebone Road and Harcourt Street. They have blocked the whole street, 3 spaces. I talked to their general manager and explained that they have blocked the space and how the council have given permission for them to do this. The manager told me that it is not our fault and it isthe council's fault because the council had given us the 3 car space. If you have allowed this why is there no sign or warning for any parking for cars to park. If i claim from my insurance it will be a big damage. Are you responsible for this accident or the company. Someone said that it was the Westminster rubbish collect car that had damaged my car. I want to know who is responsible for this and who would pay for the damage.