Reported via iOS in the Flytipping category anonymously at 07:45, Wed 9 December 2020 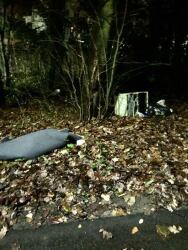 In Grimesthorpe Woods on left of footpath leading from & parallel to Earl Marshal Road (entrance opposite Westbourne House Nursing Home) opposite & just up from lamppost 39.