Reported via iOS in the Flytipping category anonymously at 21:02, Sun 22 November 2020 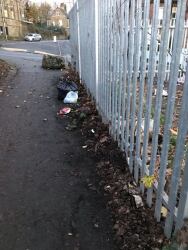 In alleyway alongside car park of Loxley Court Nursing Home, between Petre Street & Grimesthorpe Road, opposite the entrance into Earl Marshal Road.