Reported via mobile in the Pavements/footpaths category anonymously at 12:29, Sat 31 October 2020

Sent to Merthyr Tydfil Council less than a minute later 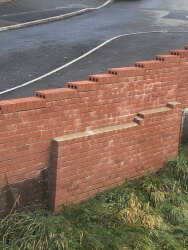 The corner has been altered we live in dead end both myself and neighbour park outside the house for me to get out I have to mount the pavement which is dangerous it not wide enough to drive out . There was no problem until the widened the corner which is causing traffic problems also