Reported via mobile in the Graffiti and flyposting category anonymously at 06:59, Thu 15 October 2020 using FixMyStreet Pro 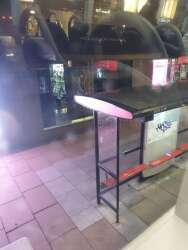