Reported via desktop in the Highways category anonymously at 18:38, Thursday 8 October 2020

Sent to Barnet Borough Council less than a minute later 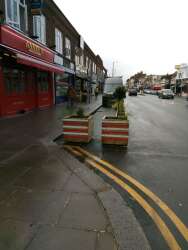 This is an inquiry but could present a problem for motorists who wish to park ans shop in this area. I live in Finchley Central. This morning I was surprised to see three areas in Ballards Lane which have been cordoned off by plant troughs so preventing the parking of cars. Is this allowed / official or have retailers taken it upon themselves to erect barriers?

I have attached one photo outside 'Annie's'.