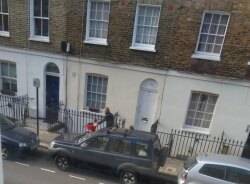 This is now a common sight in Westminster. Cyclists using pavements despite the many bike lanes also electric scooters. And cars going the wrong way down one way streets.