He is taking up two spaces very inconsiderately, it is not even as if he was a bit over he was half in one spot and half in the other. 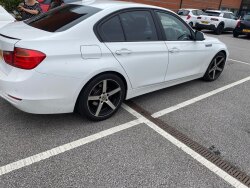 This car being in two spots in dangerous in case somebody doesn’t see it and tries to pull into the back spot. Also it’s just inconsiderate in general