Reported via Android in the Flytipping category by Amanda Morgan at 18:48, Sunday 21 June 2020 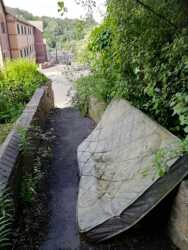 It's on the footpath up the steps into the woods, off Earl Marshal Rd opposite Upwell Hill next to the end house, running parallel with Whiteways Road, with the public footpath sign.

This has been reported a few times since last year and has not been removed. It's now gone green!