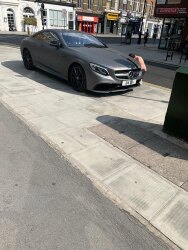 Driver left engine running for over 5minutes whilst collecting order from Joe and the Juice and became aggressive when asked to turn off.