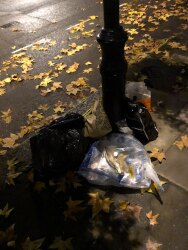 Second time today reported rubbish lamppost between 14 and 15 Montagu square. I reported some bags left there after today’s delivery and now in the evening more bags have been dumped ( which is what I said would happen) next pick up not until Friday!!! 1) put new notice up informing people of when days are for leaving 2) look to see who’s rubbish it is!!