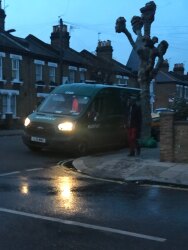 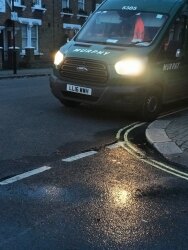 The drivers of this vehicle keeps the engine idling for almost one hour. I notice the van when I went out for a walk with my dog when I came back they still were there. So I approached the vehicle and I asked them if they can switch off the engine and they did but when I just walk behind the street corner they switch on again. They spend in total around one hour with the engine on, they also received a delivery of food in the meantime! If possible I would like to know which kind of action you will take about this report. Thanks