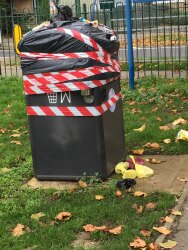 This bin has been broken since about March 2019 this picture was taken today 29th October. I have reported this previously and nothing has been done. Can it be fixed or replaced ? Now there is another bin that has been covered up that for some reason that cannot be used. The second one not a fat belly is in the park opposite the shop on Pegasus Road. So the main walkway through the middle of the park now only has one bin available for use albeit it is just of the main route people will not divert to use it ?