Bins left out and rubbish bags

Reported in the Accumulated Litter category anonymously at 10:00, Mon 26 August 2019 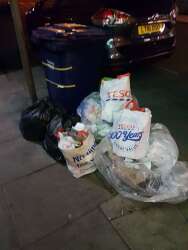 There's a number of black rubbish bins left outside flats at the top of Long Lane from number 2 down to around number 12. These are starting to block the pavement and then rubbish bags are left next to the bins which then attracts further rubbish.

There is also now a large industrial waste bin outside the newly opened supermarket on the street. This blocks the street and attracts more rubbish.